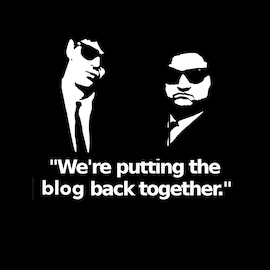 When I started blogging, it was a novelty to share personal information with the world. I loved to share things that I found online, music that I was listening to, little details about my life. After I moved from Ohio to Missouri, it helped me keep in touch with friends that had started blogs of their own. When social media started to eclipse personal blogs, I wasn’t concerned. Quite the opposite. It seemed like this novelty was now going to be something that nearly everyone participated in, instead of just a small tech-savvy set. I wrote here less and less and the site became more of just an aggregator for links to things I found until even that stopped (probably around the time del.icio.us was killed by Yahoo).

Unfortunately, things didn’t turn out quite the way I had expected. At first I thought it would be great to connect with every one-time acquaintance, co-worker, and classmate. As it turns out though, there are probably valid reasons why those relationships never went anywhere and being exposed to a firehose of information about them isn’t going to change that. Once everything and everyone was on social media and the novelty wore off it became clear to me that this was nothing like what I enjoyed about having a blog. Having a feed of every picture, every experience, every thought from everyone is overwhelming. Not to mention that a small but not insignificant percentage of those people have some problematic (deplorable, even) views on things that I have no interest in engaging with.

Meanwhile, the companies behind these sites have been shown over and over to be willing to do whatever they can get away with regarding the personal information we give them (or sometimes even that we don’t). I’ve always been aware of the adage “If you’re not the customer you’re the product” for free services but I’ve been pretty accepting of my part in that bargain. Even so, there’s only so much I can accept and Facebook in particular has gone well behind that. Twitter is really the only place that I have an interest in maintaining a presence. Despite being a fresh horrors device most of the time, I still find it to be an indispensable source of news about software/infrastructure and weird humor. As a low-friction way to share links and random thoughts it works well enough, despite the numerous problems with the way that it handles abuse.

I appreciate the idea of being able to share things in a place I own, with no ads, no feed algorithms, and no likes/favorites/reactions/ratings/whatever. A place that I know I won’t ever have to abandon in disgust after learning about yet another invasive breach of privacy. While it certainly will reach a much smaller potential audience, I’m ok with that. I think a lot of the value I get out of writing is in the way that it helps me to clarify my thoughts on something, rather than the reactions that I get from publishing it. And so, improbable as it seems in 2019, I find myself considering blogging again.

I started writing this post as a way to put the site into indefinite hiatus as I migrated it from Wordpress to a static site generator. However, as I got into it I realized that it might be fun to see if I could give this a go again. (Besides it’s been so long that it’s got to be retro-cool to host your own blog, right?) My ideas about what I want to publish are pretty different these days. I don’t really have much of a desire to publish diary-esque dispatches. I’d like to write more essays, especially about software development/operations. That’s fairly incongruous with the archives here so maybe that will end up being a separate project but we’ll see.

sum it up what I submitted and say, I’m thoroughly enjoying your blog.

I too am an aspiring blog writer but I’m still new to the whole thing.

Do you have any tips and hints for first-time blog writers?